Tuesday, March 19, 2013 – We ate breakfast at McDonald’s in Sea Girt before heading to New Egypt for the Northern Lapwings. En route we sighted:

When we got onto Brynmore Road we started seeing more birds:

At the field that had harbored the lapwings we listed:

However, we did not find the lapwings. In New Egypt we added House Sparrows. Our next destination was Barnegat Lighthouse State Park. We arrived on Long Beach Island at 9:34. As we drove toward the park we added:

The wind was really whipping when we reached the concrete walk out to the jetty. Waves were extremely high and covering much of the jetty, so we decided that jetty walking was not a good idea today. We walked to the end of the concrete section and discovered that the Harlequins were nice and close and afforded great views and good photographic opportunities. Tom spotted an American Oystercatcher standing farther out on the jetty. Two Great Black-backed Gulls were perched on the concrete section, and there were numerous Herring Gulls flying about. Common Loons and Long-tailed Ducks were numerous. Brant were feeding in the tidal pool alongside the jetty. A cooperative Great Cormorant flew in and landed on the water nearby.

We decided to drive to Ninth Street and walk in toward the jetty. This was not as productive as it sometimes is, but we did succeed in finding at least 11 Purple Sandpipers, one Ruddy Turnstone, several Horned Grebes, and 8 Sanderlings. Four Northern Gannets put on a spectacular show flying about in the winds right over the jetty. Other birds seen along the beach here included Common and Red-throated Loons, Horned Grebes, Long-tailed Ducks, and Herring and Great Black-backed Gulls. We had good views of the Great Cormorants perched on the green tower.

We returned to the van and drove along the back bay. Here we sighted:

We pulled into the Burger King parking lot, then everyone decided they’d rather eat at Taco Bell next door, so we walked across the parking lot to Taco Bell. After lunch when we returned to the car, I spotted a fracas going on at the other side of the lot. Putting the binos to my eyes, I watched a Sharp-shinned Hawk grab a bird that was black. It was not a Red-winged Blackbird as the bird’s wing was spread and there was no sign of an epaulet. It could possibly have been a cowbird or a Rusty. Within seconds the Sharpy flew off clutching the blackbird in its talons. Emily suggested driving to the rear of the parking lot as she thought the bird had landed. When we did, we observed a Red-tailed Hawk sitting on a bird that was black! What happened? Did the Red-tail steal the Sharpy’s meal? Or were they both feasting on the same flock of birds?

We continued to Brigantine Island where we listed:


En route to Cape May we noted:

In Cape May we saw:

We had reservations at the Camelot. We checked in then headed to the Italian restaurant over near the ferry terminal.

We ended the day with a trip list of 80 species. 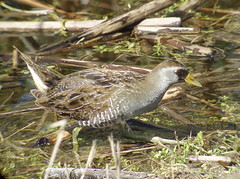