Conneaut Harbor, OH, led by Roger and Margaret Higbee. We’ll spend a good part of the day at this shorebird mecca then bird our way home. Plans are to leave Indiana at 6:00 a.m. If you plan to attend, please contact the Higbees for details (724-354-3493).

Shortly before 6:00 a.m. Lee Carnahan, Tom Glover, Emily Hughes, and Derek Clawson arrived at our home for the trip to Conneaut Harbor, Ohio. Lee and Tom rode with us while Emily and Derek followed in their car. We set our radios to Channel 11-22 so that we could communicate between cars. The forecast included 100 percent chance of rain, so we did not anticipate a good turnout of either birds of birders.

We had not yet reached Kittanning when the downpours began. Visibility was tough, but the two dozen doughnuts supplied by Emily and the chocolate chip cookies and raisin bread in our vehicle provided enough sugar to keep us going. We spotted the first birds of the day in Butler County when two Am. Crows flew across in front of us and landed in a tree along Route 422. A small flock of Cedar Waxwings were No. 2 on our list. Sharp-eyed “Captain Raptor,” aka Emily, spotted an adult Bald Eagle flying along I-79 and informed us over the radio to look left, which we did. We all saw the eagle. We drove through Lawrence County without listing one bird; of course, the heavy rain was to blame – it wasn’t the fact that we birders were snacking and gabbing. Mercer County yielded more of the same two species plus European Starlings and Rock Pigeons. In Crawford we added species No. 6 to our list, Canada Geese. By the time we crossed into Erie County, it was once again raining fairly heavily. We reached Ohio at 8:54 a.m.

We arrived at Conneaut Harbor shortly after 9:00 a.m. The first birds we saw when we reached Conneaut Harbor were Ring-billed and Herring Gulls, Mallards, and Canada Geese. We had stopped briefly to look at the water in the cove before heading to the first pond. As we started to drive away, Derek and Emily sighted a Common Merganser in the water. Fortunately, we could still see it from the pond parking lot where we added a Belted Kingfisher. After seeing very few birds here, we continued to the beach where the rain had temporarily somewhat subsided. We opened our hatch where three of us huddled behind scopes to check the gull flocks and look for shorebirds. Meanwhile Lee and Tom had taken shelter under the observation platform. Roger was the only dry one, birding from the front seat of the van. Shorebirds seen here included:

We finally spotted one Great Black-backed Gull and a total of 9 Caspian Terns. An Osprey flew by, and we eventually counted 7 Great Blue Herons. When the rain abated, Lee counted more than 50 Turkey Vultures soaring over the hillside. One Barn Swallow swooped low over the water and disappeared behind the jetty. Rain showers continued periodically. At one point the precipitation fell with such blowing force that it felt as though we were being hit with sleet. Lee and Tom noted a car stuck in the sand, so they did their good deed by pushing the car out. The rest of us missed their heroic act. We were just too busy birding! A shorebird flew in and landed within 50 feet of our vehicles. Through binoculars I could see the bird appeared buffy and had yellow legs. I was fairly certain it was a Buff-breasted Sandpiper, but before I could get the scope on it, a truck drove between it and us flushing the shorebird. What lousy luck! A scan of the gull flock revealed a Lesser Black-backed Gull in basic plumage with a lot of head streaking, the plumage we usually see. Nearby we spotted an adult in alternate plumage with a very clean appearance and no head streaking; this is a plumage I’ve seen only once before. What a great find!

We decided to check the pond once again before heading to McDonald’s for lunch. This time activity at the pond was more apparent. Three Lesser Yellowlegs were feeding on the mud at the far end. Swimming in the water near the lily pads was a lone Pied-billed Grebe. Best sighting of all was an immature Black-crowned Night-Heron along the stream. We drove past the cove where we sighted a Red-breasted Merganser swimming close to shore.

During lunch at McDonald’s we had the opportunity to look at the Clawsons’ photos from Africa. What great shots! We recognized a lot from Derek’s September presentation to Todd Bird Club, but there were others as well that we had not seen.

Emily was scheduled to work on Saturday evening from 7:00 till close, and she was already operating under sleep deprivation as she had worked the night shift before coming to Ohio. Emily and Derek headed back to Indiana while the four of us returned to the harbor. Our first stop was at the cove near the docks where the Red-breasted Merganser was resting on shore amid all the Mallards and Canada Geese. Another check of the pond revealed a Green Heron and two Green-winged Teal. Driving toward the beach, we came upon the large flock of gulls.

When we arrived at the beach, an Ohio birder was present. We parked beside him and asked what he had seen. He told us that the Buff-breasted Sandpiper was right in front of us on the spit. Within seconds we had located it and all of us saw it in our scopes. Nice! All morning long we had been unsuccessfully watching the sand piles for the Bald Eagles that always hang out there. I asked the Ohio birder, “Where are the eagles?” He replied that it was strange that he hadn’t seen them either. Just then one appeared over the most distant sand pile and within minutes we had spotted three Bald Eagles. I guess we just had to ask!!!

A passerine flew from the jetty, over our heads, then returned to the jetty where it landed on the rocks. I focused my scope on it, and couldn’t believe my eyes. I announced, “Yellow-headed Blackbird in my scope!” We all got to see it well. It was a life bird for Lee and a state bird for Roger and me.

We watched the same little group of shorebirds – Semipalmated Plovers, Semipalmated Sandpipers, Least Sandpipers, Sanderlings, and the Buff-breasted Sandpiper – working their way along the spit as they fed. A Double-crested Cormorant that had landed on the distant jetty was a new bird for the day’s list. Shortly after 3:00 p.m. we decided to head to Pymatuning. Just as we were returning to our van, three Killdeer appeared. On the way out we stopped along the road and checked out the sand at the ponded water. Two Pectoral Sandpipers were busy feeding here. And, of course, we had to stop once again at the pond where Roger found another Black-crowned Night-Heron, an adult perched in a tree along the stream.

Along Route 6 in Ohio we added American Kestrel to our lists.

Our first stop at Pymatuning was at the fish-feeding spot. Here we noted a Bald Eagle, Double-crested Cormorants, Ring-billed Gulls, Mallards, and Canada Geese. We continued to Miller’s Ponds where the pond closest to Route 285 has grown in. We continued to the second pond where we watched three Bald Eagles circling high overhead. A Great Blue Heron was hunting the far shore of the pond while two Wood Ducks rested along the water’s edge. We spotted three Sandhill Cranes in flight, two adults and a juvenile, that disappeared in the direction of the third pond, the one viewed from Route 285. As we were preparing to turn around, a Pitt van appeared from the back road . We stopped to talk and learned that the passengers were participating in an outing that Tony Bledsoe had canceled because of the predicted weather. However, the storms had cleared and the sun was shining.

By the time we had turned around, the Pitt birders were staring at the first pond. We got out and added a Solitary Sandpiper to our day’s list. Hawking insects over the water were several Tree Swallows. We proceeded to the pond visible from Route 285. Here two more Bald Eagles and a Red-tailed Hawk were soaring overhead. Perched in a dead snag were a Northern Flicker and several Cedar Waxwings. Driving through Crawford County on our way to Shenango we noted
Turkey Vultures, another American Kestrel, and several Eastern Bluebirds. Crossing into Mercer we listed Red-tailed Hawk, Gray Catbird, Eastern Bluebird, and Mourning Doves.

Our last destination was the Golden Run Area of Shenango Reservoir. As we drove the entrance road, we spotted a large raptor in flight. Although it looked as though it had landed, we could not relocate it. Continuing to the end of the road at Golden Run, we heard at least two Northern Cardinals chipping and found a flock of about 30 American Goldfinches feeding the in the open field. We parked the car and walked down the dead-end road onto what had formerly been the lake. The water level was extremely low, so we were able to walk several hundred feet toward the water. An Eastern Phoebe wagged its tail as it perched on a piece of vegetation. A Greater Yellowlegs that we later observed catching a minnow gave its three-note call as we walked the path. Amazingly the first shorebird we viewed was a Buff-breasted Sandpiper. On the mud to our left, besides a flock of Ring-billed Gulls, were a Semipalmated Plover, a Black-bellied Plover, a Pectoral Sandpiper, and three Killdeer. Two Belted Kingfishers rattled as they flew by. Behind us in the trees we heard noisy Blue Jays and American Crows. Several trees harbored a flock of Cedar Waxwings, and American Robins were laughing. An Osprey appeared for a brief minute. Tom found a lone Pied-billed Grebe across the water very near the other shore. Feeding low over the water were both Tree and Barn Swallows. After studying the shorebirds for a while, we turned our attention to our right where the Greater Yellowlegs was feeding. We watched as it caught a minnow then struggled to eat it. It appeared to be much too large for the bird’s throat to handle, but he eventually appeared to have swallowed it. It was getting rather late, so we decided to head home.

Mercer County also yielded House Sparrows and Red-winged Blackbirds. By the time we reached Moraine State Park, one of us needed a pit stop, so we headed to the Route 528 access. Near the restrooms about 30 Cedar Waxwings were insect-hawking. As we were driving along, we spied a white object which several of us identified as a Great Egret. When we stopped at the observation deck, much to our surprise we found it was not an egret but rather a duck nesting tube. From the platform we noted Ring-billed Gulls, 2 Great Blue Herons, 4 Green Herons, one Green-winged Teal, one Belted Kingfisher, and 10 Wood Ducks, and we also heard an Eastern Towhee across the lake.

When we arrived back at our home in Indiana, a Barred Owl was hooting. What a great ending to a wonderful birding trip! 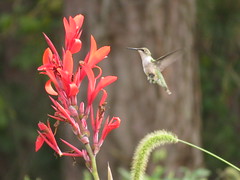