Todd Bird Club Facebook Page
Saturday, January 16, 2016
The Todd Bird Club now has a Facebook page, http://www.facebook.com/toddbirdclub! "Like" our Facebook page to join our conversation about birding. Keep us updated on your latest outings and bird sightings. Share your photos and videos.

Wings and Wildlife Art Show, Nov 7-8, featuring two Todd Bird Club members
Monday, October 26, 2015
The Wings and Wildlife Art Show, featuring 46 artists, will be at the National Aviary in Pittsburgh on November 7 and 8, 10:00 a.m. to 5:00 p.m. The artists include two Todd Bird Club members, Nancy Smeltzer and Sue Donley. Visit the art show to support the Aviary and our artists.

Roots and Wings: an Art Exhibit at the IUP University Museum
Wednesday, March 19, 2014
The University Museum celebrates spring with a colorful exhibition of paintings and drawings, Roots and Wings: Maura Koehler Keeney and David Tomb, April 5 through May 17, 2014. The public is invited to a free opening reception on Saturday, April 5, 6:00 to 8:30 p.m.

Maura Koehler Keeney's work focuses on botanical subjects and David Tomb focuses on birds. David is also an avid birder and plans to accompany the Todd Bird Club on its Yellow Creek outing on the morning of April 5.

More details about the exhibit and its associated events are available from the IUP University Museum and in the exhibit's press release.

Mystery Heron by Kovalchick Convention and Athletic Center
Monday, July 15, 2013
John Taylor saw a mysterious heron today by the pond south of Kovalchick Convention and Athletic Center. He didn't have binoculars with him, but he was able to view it clearly for an extended time. He thinks that it was an immature Yellow-crowned Night Heron. Read his analysis in his outing report. 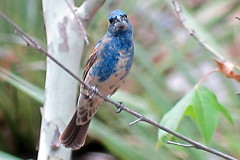