The Eastern United States Golden Eagle Research Project, spearheaded by Dr. Todd Katzner, will be the topic at our April meeting. Cory Wentzel, the evening's presenter, who has been with the Bureau of Forestry for 21 years, will discuss his involvement with this project.

Cory, a Forest Assistant Manager with DCNR, Bureau of Forestry, Forbes Forest District, based in Laughlintown, PA, manages one of many Golden Eagle camera bait sites in the eastern United States. He will present photos of Golden Eagles, as well as those of other animals, that have visited his bait site. He will also show a homemade video of the capturing and processing of a Golden Eagle at his site on Laurel Mountain in 2012. Cory said that getting to hold the Golden Eagle in his arms was one of the greatest experiences of his life. Cory writes, "Golden Eagles are amazing creatures. I’ve been a birder since I was six years old, but I did not know Golden Eagles were spending their winters in our PA mountains until I started working with this project." Don't miss this very special presentation. 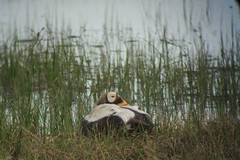